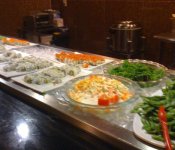 Recently we came upon the Teppanyaki Grill & Supreme Buffet (2216 E Lake St Minneapolis)  , purportedly Minnesota’s largest buffet.  Located in the Midtown/Phillips  area of Minneapolis, one of the city’s most ethnically diverse sections,  features Asian-Japanese cuisane.  Introduced after WWII  tappanyaki  restaurants and buffets specialize in Western influenced food.  Victuals are prepared on a flat iron plate – TEPPAN –  and either grilled, broiled, or pan-fried – YAKI -with guests as audience.  Teppanyaki Buffet has a sushi bar, hibashi/teppanyaki grill, and a Mongolian BBQ.  Guests at the Tappiyaki Grill are  typically Hispanic,  East-African,  Asian, African- American, and Black African and, to use a rather new phrase to indicate mixed ethnicity, “people of color”.  Our European Caucasian heritage places us in a new and stimulating experience as an ethic minority presence.  Seems, in fact,  we lack color.

Star Tribune headline (4/18/2012):  METRO AREA WILL TAKE ON NEW FACE – twin cities in 2040.  Report by the Metropolitan Council predicts that by 2040 the metropolitan area will have 893,000 more residents, 463,000 new international immigrants of which 83% will be non-white; and as to diversity 43% of metro residents will be non white.  The article discusses the impact upon families, educational necessities, senior population increase with associated health and housing issues,  white working age whites  declining in number and minority members in  that group dramatically increasing. Present metro population of 2.85 million in 2010 will be, its is predicted, 3.74 million in 2040.  Most significant for purposes of this blog is the fact that 43% of Metro residents will be non white in 2040, a virtual doubling of  the present number.

Born in 1928 my childhood, teenage years, and young adulthood until 1948 were lived in Milwaukee, a city comparable to either St. Paul or Minneapolis at that time.  National population during that era approximated 130 million.  Milwaukee had little ethnic diversity when compared to today.  African-American population was minimal and other minority groups, even a Hispanic presence, virtually non-existent.  Caucasian European roots was of the essence.  Germans dominated in population and cultural impact in North Milwaukee.  Lutheran and protestant churches  a key presence. Across the viaduct bridge spanning a valley was South Milwaukee and a predominant Catholic bastion.  The folks were of South European heritage, primarily Italian, having come to Milwaukee  during the railroad building boom period. The foregoing observations are, perhaps, too generalized but still of the essence. During my years in Milwaukee, including the war years, I recall only one African-American male as my acquaintance. As to other ethnic minorities none.

What astounding shifts in ethic diversity in my experience over eight decades.  Having lived in  the St. Paul Midway area for fifty years the slow but constant gain of ethnic presence and diversity was for me not only interesting but exhilarating.  After retirement it was my privilege to tutor Vietnamese immigrants for thirteen years. Having taught Ethnic and Minority Relations for many years as a study in the history of ideas immigration has always been the heart of the American experience. Growing ethnicity now and in the future is nothing new in  the American experience. As for Minneapolis in 2040 how much of the traditional Scandinavian cultural impact will still be important, or just be  a memory in 2040?  Or will the mythic  memories of Viking Scandinavian  greatness and cultural grandeur as  symybolized (supposedly) by the Minnesota Viking football team recede in memory, or be tranferred to the Los Angeles Vikings?  Might the next eight decades, the span of my life, with ethnic mixing result in a new “Genus Americanus”?

Addendum –  Star Tribune headline 5/17/2012:   Minority babies now in majority.  The first time in the nation’s history a majority of babies (50.4 percent) younger than 1 ) demographers state are either Hispanic, black, Asian or other minority. This serves “as a harbinger of change to come”.  Today’s Star Tribute (5/18/2012)  announces  A state of growing diversity with 30% of preshool-age children are minorities.  Preschool children are “the leading edge of a demographic trend”  that will shape schools, neighborhoods, and the future labor force. “Immigration is the driving force behind the changes.”