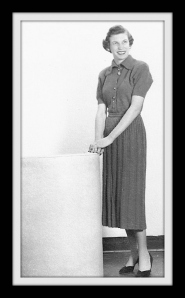 Reflections on Ruth… from Fred

Sunday morning in the fall of 1951 as the new vicar of St. Paul Lutheran Church in Austin, Texas I was greeting parishioners after worship at the rear vestibule of the church. My attention riveted on an approaching tall, lithesome, strikingly comely attractive young woman with finely chiseled features.  Our eyes met and that moment with a single glance I was smitten, and in hindsight, unmistakably love on my part at first sight. Ruth, has always been from earliest beginning and so remains at latest date my companion, soulmate, friend, constant true love, my heart’s desire – my wife.

Reflecting upon the six decades we have shared in marriage gives reason for thanking Ruth. She enriched our union with strength of character and an appealing sense of self-assured individuality. I have benefited from her capacity for an infectious excitement for new experiences and for continued personal growth, particularly intellectually and spiritually. Ruth’s gregarious disposition and generous social outreach has deeply enriched our social and home life.  Gently but insistently she brought my somewhat private and passive tendency to embrace with her a wide circle of friendships that enrich our personal and social relationships. Being together is most often pleasurable and ever enhanced by her initiative – often just plain fun and frequently providing stimulating adventure. Ruth’s unquestioned commitment to our union has been the bedrock of basic compatibility. Our six children, their mates and thirteen grandchildren, provide a rich, vibrant, rewarding family life. Ruth, as wife, mother, and grandmother is significant as our extended family’s matriarch.

She has been sensitive with care and encouragement of her mate. Without that underlying support self-doubt would have made attainment of my academic and career goals unsupportable. It is appropriate that our names are shared in THE FRED AND RUTH BARTLING SCHOLARSHIP. Ruth has wide interests in reading, continuing formal study, and shares critical insights regarding history and current event. Ruth is an effective editor and proof reader exhibiting a polished use of English. Her language skills proved beneficial in critiquing and editing my research projects. I presented Ruth Webster’s New Dictionary of Synonyms (copyright, 1968) on the occasion was our twentieth wedding anniversary.  At the time I was researching and writing the terminal degree project. The book was inscribed: “Dec. 27th, 1972 – Twentieth Anniversary – a tool to place my research into the context of readable prose – can’t make it alone, just as the two past decades made clear. A book to symbolize unity of enterprise in our household. (signed) Fritz”

Love kindled at first glance in the heart of a young man has never altered. That same man having journeyed a far distance along life’s path but never alone with Ruth as companion and wife pledges his constant, unwavering love.

DESTINY is the enigmatic element that brought Fred and I to the altar of St. Paul’s Lutheran Church in Austin Texas on December 27, 1952. Threading its way from the origins of our families in Hanover, Germany both the Pfotenhauer family and the Tiemann family lived and worked side by side and followed their dreams to America. My family came from generations of farmers; Fred’s family came from generations of clergy. My family settled in Kansas; his in the Chicago area. Education has a way of changing the course of family history. So when my father became a teacher leading him to a professorship at the University of Texas and Fred was assigned a vicarage at St. Paul’s we were DESTINED to meet, court, and be united in marriage. When he received his first call as Student Pastor at Washington State University/Idaho University it did not take him long to enroll in history classes receiving his M.A. in 1961. His goal was to exchange a preaching ministry for a teaching ministry. Once again DESTINY wedged itself between his father and the President of Higher Education on a bright Sunday morning on the steps of the church. His father and the president had a conversation about a vacancy at Concordia Academy and then discussing the availability of Fred for the position. Not long thereafter Fred received a call to become a history teacher at Concordia Academy (which later became Concorida College and in recent decades Concordia Univeristy). Our family had increased – Victoria was 10, Fred was 8, and Catherine was two months old. We moved into the Warden’s home on campus in September of 1961, then to a faculty home, and then our first home ownership on St. Clair. Fred could not have been happier and he worked very hard – he had five preparations every day the first year. And he coached basketball a couple times a week. On those evenings we had our evening meal at 4 p.m. It was weird. Elizabeth was born in February, 1963, Anastasia in October, 1964, and Stephanie in December , 1967. His salary needed to be subsidized to keep up with the increasing expenses of the family. He did a lot of preaching on the weekends and was the Assistant Pastor at St. Stephanus for Pastor Goehle. Our social life revolved around the Concordia family – both our families were hundreds of miles from us. We enjoyed potlucks, picnics, holiday gatherings, basketball games with his colleagues and their families. We talked babies, recipes, current events, college concerns, house and home decorating, grocery stores,  second-hand stores, and summer plans. We had so much fun together. Fred and I had our own interests – we bought season tickets to the Guthrie because it offered the Educator’s Discount Package; we split a season ticket to the Minnesota Orchestras with Bob and Tomi Rickels; we were part of the audience for SPCO concerts when it performed at Central High School. He was a father of the 90’s in the 60’s when taking children for a walk in the stroller was not popular. He built snow slides for them in the backyard over the Christmas holidays, took them trick or treating, exposed them to art galleries, took them fishing, and basketball games. Fred had a deeply satisfying and fulfilling teaching ministry – and for me too, it was a great gig.